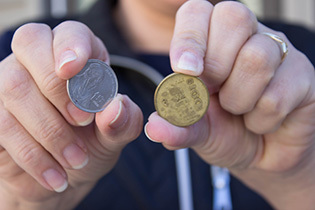 As a child, I would ask my mom for a peso to buy some animal crackers. It didn't happen often. One time, my dad had just arrived from "El Norte," and we asked him for 50 pesos. He gave us 100 pesos, and we spent it all on animal crackers. Three kids with 300 pesos-worth of animal crackers lasted a long time.

I am Viviana Casillas Reyna and I am originally from Zacatecas, Mexico. I came to this country 28 years ago. The objects I brought for the exhibit are two coins, a one-peso coin and a hundred-peso coin, that show the years 1990 or 1988 on top.

These two coins are significant for me because they speak to when we were children and my father lived here in the United States and we lived in Mexico. The times when he would visit us, he brought us little things, different things, to show us that he was back and that we had been in his thoughts.

On one occasion that my father came to Mexico we were going to ask him for one peso so we could buy animal cookies. And I remember that I said to my brother and sister, “we’re going to ask him for 50 pesos! Because if he’s coming from the United states, if he’s coming from the North, he must have a lot of money!” But my older sister said, “no Vivi, no, only one peso, only one peso!” And so we went to my father and asked him, “Papa can you give us one peso to go to the store?” And my father said, “what are you going to buy?” And we told him we were going to buy animal cookies. So he said yes that he would give us money - and instead of 50 pesos that we were asking for, he gave us 100 pesos. And with these 100 pesos my brother my sister and I went to the store; kids of about 6, 7 and 8 years old, we went to the store and bought 300 pesos worth of animal cookies.

We returned with giant paper cones filled with many animal cookies. And when my father saw us he asked us why we bought so many cookies, he said we could have bought a different kind of cookie. But we said, “no, because the animal cookies will last us.”

This was one of the few times I saw my father cry. When he saw that we tried to do as much as possible with what we had, and that he had given us 100 pesos - and 100 pesos was a lot - we could have chosen the sweetest cookie, the most beautiful cookie, but we chose animal cookies because we wanted them to last as long as possible for the time that we had with him - usually he stayed two weeks in Mexico with us.

After that was when my mother asked my father if he would live with us in Mexico or if we would go to the United States to live with him. And for this reason my mother has her contribution in this exhibit as well - her bills and her shoes.

This country has given us more than we would have been able to have in Mexico. But at the same time, while we’ve been able to have so much here, we’ve had to pay a high price. We’ve lost members of our family who are now no longer with us. It has given us successes, it has given us joys, it has given us triumphs. But the memory of coming to the United States where three of us were going to die and only one of us was going to be able to stay. Now he has been deported, my older sister passed away, and now the only ones here are my mother and myself. My father is far away, and my sister is far away.

But being here has given us a strong life experience, and we have valued every day and our existence, thanks to God.