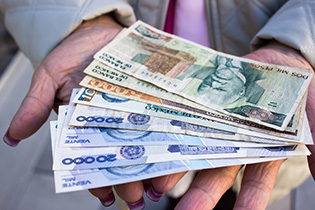 In 1990, when we lived in Mexico, my husband was in the States. I gave him an ultimatum to bring us to him. I sold the two horses we had. I saved the money and brought it with me in my shoes. Throughout the trip/journey back and forth to the border, I kept my money in my shoes for fear that our savings would be taken away.

In regards to the money, he sent me money to Mexico and I had to cash it because I had to pay for the work arrangements for the land.

I brought money from Mexico, as I came, I brought large bills in my shoes. And I sold two horses because they made me angry. It seemed simple. I thought, “if the man comes tomorrow to buy them…” And luckily he did, and so I sold them, and brought the money with me for travel expenses.

I brought the money in my shoes, and I was hurting because I got blisters, but the money got here safe, I had it in a bag.

[My husband] told me to sell the horses. And I told him that I already had sold them. He asked my why I hadn’t told him, and I said because they made me angry. I told him, “You are coming back here or you’re bringing us there with you. We will all suffer together there, or all here.” And I told him, “I don’t want to be here on my own, I’m struggling, it’s challenging.” I was sick frequently with bronchitis. I couldn’t be alone handling all of this. I had to come here. And here I was sick a lot as well, until I got used to the climate here.

We got caught twice by immigration, we took about 15 days to cross the border, we went from house to house. I faced danger with my kids. In a house there was a guy that wanted to stab every child there, so I would stand in the way of him doing it. Then the Coyote got there, I was already on my way out the door, we were in Juarez all five of us not knowing but we traveled all over Juarez, and then he found us a cab and he brought us to Juarez looking for my friend’s address, after that he left us with her, but after that I didn’t know where the car was going or anything but I had faith with me and a little saint [inaudible] that a guy donated.

I didn’t let anyone check me because I had money in my shoes. They would ask me if I had money and I would say no, so they didn’t search me. They has us locked up, I got into an argument with an immigration guy, I told him “ just because I am Mexican and my kids are Mexican, I am not going to let you humiliate me and do whatever you want”. I would defend our suffering, my kids, me alone, the expenses we had, I would get sick, I would struggle and that's why he brought us here. I got here and gave everything to their dad and he saved it, but yeah the journey was a lot of suffering. The first time Viviana fell into the river her hair got stuck, she had long (hair) below the curve, I got her however I could, I had never been under water with my eyes open, I pulled her out by her hair and I brought her up.

The oldest almost drowned, so I did the same thing to get her out, The Coyote told me to leave her there that she was already dead. I told him “she’s not dead, do whatever you want but I’m going to get her out.” In that same moment Nancy went into quicksand and she had her hair a little above shoulder height, and however I could I also grabbed her by her hair. It hurt her and it hurt me, but I got her out of the quicksand.

My son also suffered, but God wanted him to be safe, because we would cross the street between the cars and he would yell at us, whistle, to hurry. But the cars were going at high speed and I couldn’t get to him and it kept raining, but here we are.